For few days, Government was facing lots of criticism for being unable to handle the Calais crisis. The new legislation was announced days before the new immigration figures are to be released. 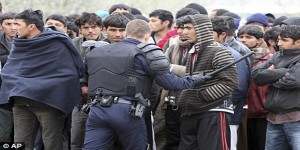 Speaking to the media, James Brokenshire , the Immigration Minister said that: “Anyone who thinks the UK is a soft touch should be in no doubt – if you are here illegally, we will take action to stop you from working, renting a flat, opening a bank account or driving a car.

“As a one nation government we will continue to crack down on abuse and build an immigration system that works in the best interests of the British people and those who play by the rules.

“Illegal workers will face the prospect of a prison term and rogue employers could have their businesses closed, have their licenses removed, or face prosecution if they continue to flout the law.”

Under the new law, if any office is found to have hired any foreign worker illegally, then all their licenses to operate will be ceased. So, if are working in UK without any valid documents, both you and your employer will land up in court.

Actually unemployment in Europe was on the rise and many foreigners were coming to UK and taking up the job of locals. This was raising anger among the local population and the Government had to intervene at some stage.

Days On Earth Have Shortened Because of Japan Earthquake

The massive earthquake that rocked Japan on 11th March has not only devastated human life and economy, but has also shortened the length of a day on the Earth. It has also shifted the mass of the planet and shortened the day of the Earth by a fraction.

If you haven’t yet planned regarding how to celebrate this Black Friday which generally occurs on the Friday after the fourth Thursday in November, then here are some useful tips. As everybody knows many people prefers to spend this day by doing lots of shopping for upcoming Christmas occasions. So popular stores like Walmart or […]

US news college rankings announced – Harvard is the winner

The US news college rankings 2011 have been published and this has raised a lot of enthusiasm among the students community at large. As per the report published by the US news and world report college rankings, Harvard again went on to regain the number one slot alone, after sharing it with Princeton last year.