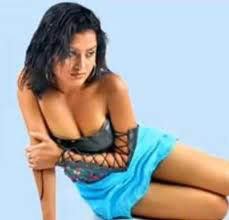 Rekha Thapa, the 20 something hot actress of Nepal has joined the revolutionary Maoists group in Nepal. Giving a shot in the arm to the revolutionists, she joined their outfit in 2009 and is now aggressively campaigning for them.

Rekha Thapa is widely known for her appealing body and also many a controversies she has raised in her life.

Rekha Thapa has also agreed to sign a new film with a director who is considered to be close to the Maoists. She also raised many a eyebrows when she made the revolutionary leader Prachanda dance with her in her short outfits when they were putting up a blockade in front of the Prime Minister’s office.

This month, Rekha Thapa has come a bit closer to the Maoists as she has turned to be a sister of Chandra Bahadur Thapa Sagar, chief of the Maoists’ much-criticized youth organization, the Young Communist League (YCL).

The oil rich Nigerian nation has come to a complete halt as the people of the country are going for massive demonstrations and strikes, protesting against the Government’s decision to hike the fuel prices to a great extent.

How to Get to Know Your Representatives

If you are feeling disconnected from your local representatives, then you may want to try to get to know them and their platforms much better. Here are some ways to become more in touch with what is going on in Washington.   Go to Local Events or Town Halls Town halls are a great way for […]

In a bid to create more employment in America, President Obama has submitted the America Jobs Act of 2011 to the Congress on 12th September. The bill is intended to reduce the payroll taxes while increasing the take-home salary of the working mass without escalating the deficit.

One Reply to “See Hot Pictures Of Rekha Thapa, The sex Symbol Of Nepal”