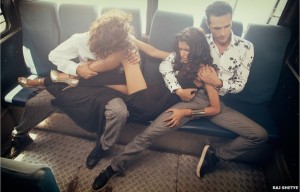 Huge outburst of disgust and anger hit the social media when photographer Raj Sheyte posted a photo of an Indian fashion shoot, where a model was seen deliberately fighting against two men, while being groped by a gang. Nonetheless, the fashion photo shoot was in a close proximity to the infamous rape case that happened in capital New Delhi, whereby the nation’s conscience was moved to a great extent.

The infamous incident had a 23 year old physiotherapy student dubbed Nirbhaya(fearless) as the victim, where a gang brutally raped her in a bus and was ultimately killed after few days, fighting for life in the hospital. Such was the impact of the incident that even today it gives everyone a shiver and practically tears roll down the cheeks in remembrance of the lovely Nirbhaya, who became a dear one to all the Indians.

Renowned and eminent persons in the field of art strongly criticized the idea of a fashion shoot depicting such an incident. Bollywood music director Vishal Dadlani felt the person behind this idea must be put behind bars in no time.

Like Dadlani, many are of the view that nothing can be more disgusting than such an idea and such a photo shoot will promote and provoke further such incidents. Actor Amrita Puri strongly condemned it and tweeted that a rape can never be a creative inspiration for fashion photo shoot.

The photo feature was named as “The Wrong Turn” by Sheyte, who nonchalantly said that he had no intentions of glamorizing the act, but was just trying to throw light on it.

US Lawmakers See Narendra Modi As PM In 2014

A report prepared by the US analysts has suggested that there is a huge possibility of BJP returning to power at the center. The report has warned the US lawmakers that if such things happen, then the Gujarat CM Narendra Modi will be all set to become the Prime Minister of India.

A massive earthquake of the magnitude of 8.9 on rector scale has hit the east coast of Japan, creating massive damages in the cities and places along the coastal areas. Though the authorities have reported only fifty deaths till now, but the toll of dead and casualties are expected to increase in the coming days.