Recent news from NASA has revealed that they have discovered a new planet similar to Earth which also orbits a star and also may have life in it. This new discovery of NASA was made by Jon Jenkins and his team. One of the team members of NASA said that this planet is very similar to the Earth and we can also call it as our second home. Named as Kepler-452b the planet is little older than our Earth. This remarkable discovery has answered a lot of questions about the outer space which remained unanswered for a long time. 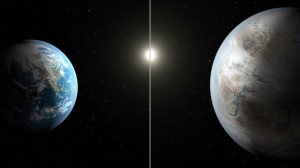 The Earth’s cousin also known as the Kepler-452b orbits around a star which is also similar to the sun and the same distance about which the Earth orbits around the sun. Hence the team from NASA is saying that this planet also might have life. Dr Jenkins who is the leader of the team which made this amazing discovery said that this system is very similar to the relation between Earth and the sun. According the Dr Jenkins the Earth is not lonely as it has a cousin now and this is the first question which got answered. This NASA breaking news has made us think that we can have a second planet as our home.

The NASA’s Kepler space telescope contributed a major part in the discovery of this planet. It is said that Kepler will discover more thing about this planet. The new planet discovered by NASA is older and bigger than the planet Earth. We are not alone in this universe and this discovery has proved it. Kepler has answered a lot of questions like this and will continue to do it. The scientists are still uncertain about the planet’s topography. They are confused whether it is rocky or not and if it is found that the planet is rocky then it will be five times heavier than the Earth. The solar system in which the planet is located is 1400 light years from ours and is in the constellation named as Cygnus.

M.F. Hussain, Painter and Creator of Gajagamini, Is Dead

The noted Indian painter M.F. Hussain died today in a London hospital at 2.30 a.m. in the wee morning hours. The celebrity painter was 95 years old at the time of his death.

There is a popular saying that God has created parents as He cannot be present everywhere at the same time. So, he sends parents to protect His children from every problem. We, too somehow believe the fact that our parents are the reflection of the great Almighty. But have you ever thought of getting separated […]

What Is Sex In Terms Of The Holy Bible

The Bible has long been a matter of great dispute as far as its views on sex are concerned. The Song of Solomon in the Bible can be considered as an ode to sexual desires as it was composed even 1200 years before the birth of Lord Jesus.