15 August is the day which is considered to be the most significant day in Indian Calendar. How can one forget the day when India got its most coveted freedom from the British colonial rule after so many years of slavery?

On 15 August 1947, India promulgated the end of the imperialism. During British Imperialism, India used to have over 560 princely states. Now the country is going to commemorate its 69th celebration of India’s freedom on this Saturday, 15 August 2015. Being Indian we are putting here some interesting facts that every citizen must know. 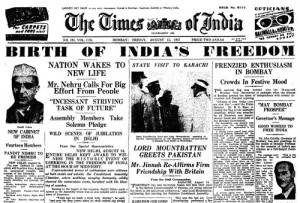 On the first Indian Independence Day which took place on15 August 1947, millions of people flocked together in Central Delhi and saluted the newly hoisted tricolor Indian flag by firing rainbows in the sky. Seeing this spectacular event British Government, Lord Mountbatten wrote in a report that

“I had never noticed how closely a rainbow could resemble the new Dominion flag of saffron, white and green.”

It was midnight of 15 August 1947, when India was declared as an independent country by the Pandit Jawaharlal Nehru. In his speech addressing the nation he said,

“Long years ago we made a tryst with destiny, and now the time comes when we will redeem our pledge, not wholly or in full measure, but very substantially. At the stroke of the midnight hour, when the world sleeps, India will awake to life and freedom. A moment comes, which comes, but rarely in history, when we step out from the old to the new, when an age ends and when the soul of a nation, long suppressed, finds utterance. We end today a period of ill fortune, and India discovers herself again.”

Now the question arises why the fore leaders chose to proclaim Indian independence at midnight when the entire nation was supposed to sleep?

According to sources, astrologers protested across the country due to the auspiciousness of the day and time. Since astrologers’ prediction was 15 August 1947 was an “unfortunate & unholy” date according to astrological calculations, so they suggested the midnight hour between August 14 and 15 due to the plain cause that according to English a day starts at 12 AM, but according to Indian calendar, starts during sunrise.

After Indian independence there was no National Anthem of the country. Even though the ‘Jana Gana Mana’ was written in 1911 by Rabindra Nath Tagore, it was not adopted as national anthem till 1950. Jana Gana Mana” was officially announced as the Indian national anthem on 24 January 1950 by the Constituent Assembly.

Much speculation is going on in the social circle about the royal wedding procession route of Prince William and Kate Middleton. Various maps are being available all over the Internet which shows the wedding route of the royal couple.

With the clock at Westminister Abbey striking eleven, all eyes were at the bride’sgorgeous gown as Kate Middleton descended the car to walk down the aisle with herfather Michael Middleton. Over two billion people watched the live royal weddingcoverage right from the pre nuptial preparations to the moment when the couple leftthe Abbey wed riding […]

The nation suffered a major tragedy on 9/11 that they had never expected since the major tragedy on December 7. The fact that we lost lives on American soil hit home hard. Americans are not used to having such things happen in their own back door.