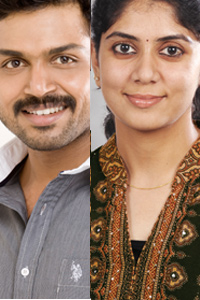 The actor Karthi marriage announcement was made by his father Sivakumar, who said this through a press statement. Incidentally, Karthi is the younger brother of leading actor Suriya. The actor decided to get married when his career is almost at the peak. His latest film Siruthai, released in 2011 is going to be his greatest hit. Karthi is now working on his next film named Sakuni.

Actor Karthi marriage has been fixed with Ranjani, who is a gold medalist in Literature from Stella Maris, Chennai. Her parents are Erode Chinnaswamy and Jothi Meenakshi. Kathi made debut in his film career in the year 2007 with the huge hit film Paruthiveeran. The movie made many fans of actor Karthi because of his famous dialogue “Yenna mama sowkiyama’. His career graph is moving upwards quite fast as his movies like ‘Paiyaa’ and ‘Naan Mahaan Alla’ have given good returns at the box office.

With actor Karthi marriage getting fixed, female fans will have to wait for the next eligible bachelor in Kollywood.

Genelia D’Souza To Tie The Knot With Ritesh Deshmukh

It seems love is in the air again in Bollywood as cute pair Riteish Deshmukh and Genelia D’Souza have decided to take their relationship to the next level. The duo have decided to tie the knot on February 3rd this year.

Miranda Kerr has posted a recent picture of her in Instagram, flaunting her naked body, which garnered many negative feedback from her followers. The picture was posted to emphasize a pair of Reebok Runners, while Miranda is often seen posing for the brand in a crop top and a pair of leggings. After Orlando Bloom’s […]