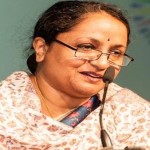 It has been clearly reported that Sujata Singh has been declared to be the next foreign secretary offered from Prime Minister’s office. She has been performing the responsibility of India’s envoy to Germany after which there came the nod from Prime Minister Manmohan Singh’s official announcement that she will head the official position of foreign sectary ship, thus ending the speculation and lots of gossipy uproar on whom will be the next appointed chief.

Ms Singh aged 59 years have been IFS officer of 1976 batch who has also on a competition with present India’s Ambassador of China, S Jaishankar. Mr. S Jaishankar was of a batch junior to him yet he contested for the official position on account of his brilliant performance and extraordinary caliber in executing the responsibility for the apt designation he is posted in as an envoy in China.

Ms Singh was one of the undisputed women leaders after the charismatic performance of Chokila Iyer and Nirupama Rao and she will be extending the operations to succeed Ranjhan Mathai who is on a mode of retirement on July 31st. Her name was announced and unanimously vetoed in after prime minister’s Kashmir visit.

20 Countries Including USA Gets Tsunami Warning Because Of Japan Earthquake

The massive 8.9 scale earthquake in Japan has triggered off tsunami warnings in at least 20 countries of the world, including the USA. The tsunami with 10 meters high waves has already hit the Japan coast, killing many people.

A group of Filipino employees working with a California hospital has sued their employer saying that he was forcing them to speak only in English. Filipinos are the largest ethnic group in the hospital and this they consider as a basic violation of their freedom of language.

On Wednesday, people came to know about the death of Matt Hughes from the Storm Chaser team. He got a fatal injury about a week back and was hospitalized where he breathed his last on Wednesday. Born in 1979, he was only 31 years old at the time of his death. America was shocked to […]