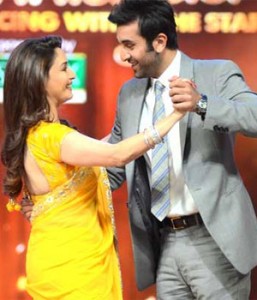 It seems to be the talk of the town that Ranbir kissed Madhuri, who has raged the entire nation with her Dhak Dhak item.

Actor Ranbir says that he is so much in awe with Madhuri’s performances and her latke jhatke dance style in masala flicks and so overwhelmed to have met her that he could not control his emotions.

She was her first love and tremendously got heart break on the sudden marriage news of Madhuri when she left this Bollywood kingdom only to come back and reign once more.

This was the star confession by Ranbir when he broke out his silence and said that he even bribed and forced Ayan Mukherjee the director of his upcoming movie ‘Yeh Jawani Hain Diwani” to have kissed her on her red rosy cheeks. The two actors enjoyed and spent valuable times on the sets of Jhalak Dikhla ja when this two most famous personality disclosed their hidden wish list.

Deepika Misses Ranbir On The Event of IIFA Awards

During the recent award ceremony of IIFA awards function Bolly A-listed heroine Deepika Padukone have reportedly said to be missing Ranbir from all the exclusive actions and enjoyment after receiving best Jodi award in Star Plus grand celebration. Her co-star and ex boyfriend Ranbir Kapoor were seen back on screen after their much publicised and […]