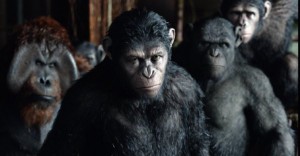 “Dawn of the planet of the Apes” is a movie that tells the story of humanity’s self-inflicted destruction, by focusing on a single ape Caesar. The film takes up the events, taking place after a decade since 2011’s “Rise of the planet of the Apes”. “Dawn” tells the story of the declining humans, because of their own experimentations by injecting their intelligence onto the apes, who wages war against the cruel human-kind. With all their aggressive attitudes, the apes are still portrayed as sympathetic and kind beings, unlike many of the human beings we regularly come across. Director Matt Reeves has done a great job, by choosing a lush green and beautiful backdrop that adds to the beauty of the film.

The movie is action packed and shows the violence the human beings resort to, in order to protect themselves. The apes are well aware that humans bank on guns to protect themselves, and kill the apes, thus they destroy all the arms that comes in their way. During the film though we try to sympathise with the ape for the bondage they suffered, along with this we also pray whole heartedly that the humans trapped, do get away safely. This film like its previous sequence, is extremely well directed, and thus a must watch for all. Whether you have watched “Rise of the planet of the Apes” or not does not matter, you will be able to conceive its plot well. Action here is not put in merely for the sake of action, but it genuinely arises from the conflicts in the plot of the film––making it a great entertainment.

Quite often than less, Kim Kardashian gets into controversies and her second pregnancy is of no exception. Recently, the 34 years old TV star has posted her naked selfie to dismiss rumors that she is using a surrogate to be a mother for the second time. Along with the picture she also posted an explanation […]

Is The Patient In The Episode House Really Suffering From Smallpox?

“A pox in our House” telecasted on 15th November showed a patient has been brought to the house by the good Masters played by Amber Tamblyn. The first impression of the show is really impressive since the character is shown to be arguing with the doctor played by Dylan Baker. Actually, the doctor in the […]

Do You Believe “OPRAH” A Lesbian?

Oprah Winfrey, the popular TV personality once again has hit the headlines because of her lesbian connection with her long term pal Gayle King. This time she has spoken to Barbara Walters in a television interview on channel ABC.