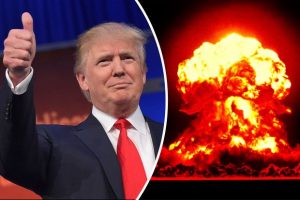 President Donald trump tweeting about United States powerful nuclear armoury and threatening North Korea have somehow given us small indication of nuclear war. But the process by which the President can order nuclear strike is illegal as said by some of the US Congress members. A proposal has been filed by the representative Ted Lieu stating requirement of Congressional approval before the launch of first nuclear strike by the President. Lieu said “Right now one person can launch thousands of nuclear weapons, and that’s the President. No one can stop him. Under the law, the Secretary of defence has to follow his order. There’s no judicial oversight, no Congressional oversight”.

After the bombings of Hiroshima and Nagasaki in Japan to end the World War II, the recent nuclear launch approval was cherished. President was given the full responsibility regarding the nation’s nuclear armoury after President Harry Truman signed the atomic energy act of 1946. As per the launch, a single verbal order by the president allows him to use the nuclear weapons. The President’s order is foremost and cannot be overridden. He doesn’t even require the permission of the defence secretary. US Supreme Court has not answered till now whether the recent launch approval is legal or not. However some legal scholars gave us their mixed opinions on that.

According to the Constitution, the President is allowed to use a part of the military force for self-defence. But would it be constitutional to react to the current bombing with a nuclear strike? According to Samuel Issacharoff (Law professor in New York City), nuclear weapons are a beginning to mass destruction which is apparently not seen by the framers. A compressed design of a founding document cannot make a President military action whether nuclear or non-nuclear, unconstitutional. This is the first time after World War II that constitution has given Congress the right to declare war.

However, Trump and other Presidents have initiated war actions without Congressional approval. In 1973, Congress passed a resolution that the President can use armed forces but he has to report it to Congress within 48 hours and if the US Congress did not approve of this, then he has to remove forces within 60 days. As per some experts, Trump could bypass the need for Congress to declare the war as United States is already at war with North Korea. US Congress never formally announced war with North Korea.

Is Rashard Mendenhall Not Happy About Osama Bin Laden Death?

Can you believe that an American is not celebrating the death of Osama Bin Laden? The unusual seems to have come from Rashard Mendenhall, running back of Steelers Team. While the death of this terrorist came as a good news to the entire nation of America since the man was held responsible for killing approximately […]