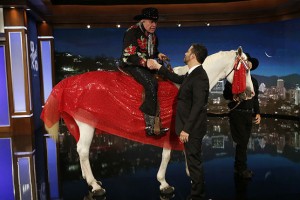 When there is glamour, the Dancing with the stars is the ultimate phenomenon that rocks millions of hearts. After the overall twenty successful seasons this going to be hitting the population once again with its 21st season. The famous superstar Gary Busey will be joining the 21st chapter of this prestigious show and he is going to be hit the floor. The actor Gary Busey rides on a horse into the studio live to make his announcement. There are other official cast members in dancing with the stars season 21, but they are not as catchy as Gary Busey. The outstanding Gary Busey, who is more known for his scary – looking mugshot showed up on the fellow show of Jimmy Kimmel Live, telecasted by the ABC, to make the announcement on Tuesday. He shared his fashion phenomenon as news by riding on a white horse in his western outfit.

Paula Deen, Bindi Irwin, Nick Carter and Victor Espinoza will be there with Gary Busey. Famous people like Karina Smirnoff, Val Chmerkovskiy, Derek Hough, Mark Ballas, Artem Chigvintsev, Allison Holker, Witney Carson, Sharna Burgess and Peta Murgatroyd will be appearing too in the dancing with the stars season 21. But when Gary Busey was asked by Jimmy Kimmel that why he is so much interested in that reality competition, in reply the superstar said that he doesn’t have anything better to work out with. However, there are few more contestants who are yet to be named in that show, but it is already announced that the whole cast of this season will be revealed on September 2, on Good Morning America show.

Gennext kids are definitely a step ahead than the present generations. But parents are finding it difficult to grasp that children, as young as eleven years old, are having sex and they do not see free availability of condoms from the health department of Philadelphia as a welcome step.

Couple of earthquakes shattered the San Francisco Bay Area on Thursday. The first one occurred at 2.45 P.M. followed by another after five and half hours later.