World is shaken with the news of the huge explosion in China that took place on Wednesday at around 23:30 (15:30 GMT) following by another more devastating blast leaving at least 45 people dead with hundreds of injured.

This shocking blast happened in a warehouse located in China’s northern city of Tianjin. According to sources the warehouse was storing some dangerous explosive chemicals that triggered the blast.

The severity of the explosion can be easily estimated with China explosion videos that are being circulated throughout the internet. The enormous flames and vibrations generated with two consecutive blasts in the China explosion factory have tore through the northern China port city. According to the local witnesses the initial fireball was so powerful that it lit up the sky above Tianjin and residents felt the shock-waves from several kilometers away. 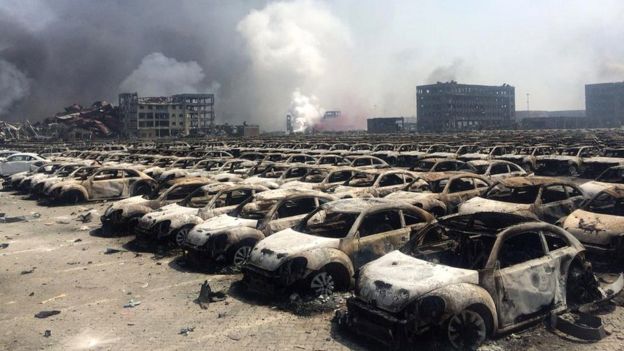 Reuters has reported that more than 400 people are seriously injured and hundreds are missing. President Xi Jinping has requested “all-out efforts” to save explosion victims and control the fire.

Authorities are still trying their best to figure out the exact number of casualties and injured people.

Man Puts Intimate Pictures Of His Wife On The Internet

What a shameful incident! A man in West Bengal, India recently has been arrested based on the complaints by his wife. The offender recorded some videos of their intimate moments on a cell phone and allegedly uploaded them on the web. His shameless act did not stop there. He even sold the videos in local […]

A very strong earthquake today hit Central Oklahoma late on Saturday and major damages to private and public properties have been reported. US officials say that the earthquake today was of magnitude 5.6.

As per the reports Gujarat’s Additional DGP PP Pandey faces arrest on the breach of law during fake encounter. The Supreme Court invalidated the statement giving any security and protection issued against him by CBI court.