The news has flashed all over the Internet that former Denver Bronco Pro Bowl WR (and current Miami Dolphin) Brandon Marshall has been stabbed by his wife in his stomach. Though much details has not yet picked in, but the player has been admitted to the nearby nursing home and he has been admitted is in intensive care after being stabbed in the stomach. 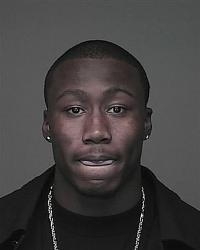 Some websites are claiming that his girlfriend has committed the crime, while some are asking that how can he have a girlfriend since he is already married. The hospital authorities have stated that no vital organs have been pierced and the noted player Brandon Marshall is expected to recover fully within two to three weeks. Suddenly the player has become a victim of crime.

Representatives of Brand Marshall, Harvey Steinberg and Kennard McGuire, released the following statement early this morning: “This is a very difficult time for Brandon and family. Thankfully he will make a full recovery, we simply ask that his privacy is respected.”

The renowned CNN sports broadcaster Nick Charles is no more. He was battling with cancer disease and died on Saturday at the age of 64. Nick Charles started his life as a taxi driver and went on to become the first sports anchor in CNN since 1980.