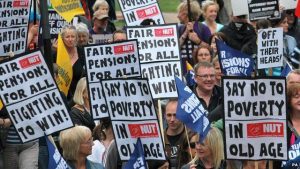 A wave of strikes will be initiated in UK by thousands of workers this week, thereby raining blows on rail, post and airline service industries in the run until Christmas. A chain of discord has flared over issues like jobs, pay, pensions and safety involving some of the country’s biggest trade unions thus disrupting these pivotal services.

Over 3000 post offices called a strike over a dispute on proposed branch closures and pay. Also, the major bone of contention in Southern rail was the over the appointment of the role of guards. The effect of the strike here was leaving about 300,000 passengers stranded at a loss. The British Airways and Virgin Atlantic are the two most important air carriers that too will go on the strike though talks for averting the same by British Airways crew is scheduled to be held shortly but lest an agreement is not reached at then the strike will be due.

These strikes have met with several diverse reactions from many people. While some traditional MPs have labeled the strike as ‘politically motivated’ and have asked for tougher laws to straighten out the ‘rebels’, Frances O’Grady, the general secretary of the TUC, denounced this proposition and emphasizing that the right to strike was a fundamental British liberty that could not be scrapped as it had huge public support.

O’Grady suggests practical steps as the solution and brings out certain practical premises too to this problem. She says that the working population in the UK were not totally wrong in demanding their fair share from their employers because their wages were indeed below par before the financial crisis.

She further added that every year the unions successfully discussed one settlement or the other and reconciled ‘thousands of deals’ without having to recourse to any strike. She lays emphasis on the working style whereby she tells that the people should focus on analyzing the points in companies that are the cause of debates and disagreements.

People sitting at the helm of these public service institutions however have their own version for the people. While Mark Davies, the head of communication at the Post Office assured that the customers would not be affected majorly by the strike, the CWU general secretary, Dave Ward has warned of a closure on the face of the managers rejecting the peace terms. ‘Deliveries will carry on as normal and the last posting dates for Christmas remain unchanged’, is what has been stated by a Royal Mail spokesperson.

If you have started sending New Year wishes and greetings to your beloved ones for a happy new year 2012 and looking for 2012 predictions to make this year more prosperous then its time to think in a different way. Though it seems hard to believe but millions of people are living with the anxiety […]

Tamilnadu coasts have been hard hit by cyclone Thane and this has lead to huge landfall between Cuddalore and Puducherry. There is heavy rainfall going on in Puducherry and strong wind is blowing. Government authorities have asked the people to stay indoors.