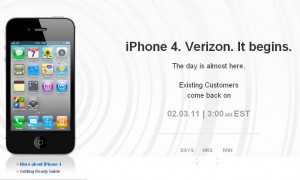 The recent grapevine that already started a big stir among all prospective iPhone 4 buyers is the news of Verizon iPhone 4 has announced its pre-order sales on Verizon Website. Those who are yearning for this temptation for long time will have to wait till 3AM EST on February 3rd to acquire their orders in from a “reserved quantity” of iPhone 4 handsets. This offer will be available only on a first-come, first-served basis. Indication says the handset to be delivered on February 10th launch date everybody has been expecting for so long. But Verizon newcomers will require signing up a contract with the network as a prerequisite once the countdown expires.

Software takes new dimension as scientists develop a bird song decoder that automatically identifies the call of a vast variety of birds. This fantastic software brings the cracking of the dawn chorus a step closer and recordings of individual birds and dawn choruses were used to identify the characteristics of each tweet. According to the […]

Apple Inc. and Samsung Electronics Co. have taken their smartphone production way too seriously not with just one but two brilliant smartphone release. While Apple came along with iPhone 6 and iPhone 6 plus, Samsung released Galaxy S6 and Galaxy S6 edge. Both the smartphones from Samsung and Apple are equipped with advanced software and […]