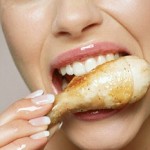 Studies of 20, 000 women have shown that the women who have consumed more of chicken in their teens had developed lower risks of having colorectal adenomas also commonly known as benign tumours that finally lead to colon cancer. So, all those teenage girls who are consuming more of chicken and fish right now are reducing their chances of getting colon cancer.
The colorectal adenomas can be avoided by 40% if one meal of the day has poultry or fish instead of red meat.Previous research have found out that red met increases the chancesof colon cancer, but of late that research has proven to be incorrect. There is no direct relationship between the consumption of red meat and occurrence of colon cancer in adulthood, but the chances of getting this form of cancer are much reduced if poultry or fish is consumed during the teenage. The risk of this form of cancer does not get decreased by consumption of poultry in adulthood.

Stroke is an out of the blue disease which may cause an acute damage to your body.  Sometimes you may feel a simple headache and may put your working stress responsible for it, but have you ever thought what will happen if this headache is not that simple? A stroke may be silently attacking you, but […]

It has been reported according to the new clarifications that consumption of sweet products or dairy products protects tooth cavity rather than harming it.

If you are suffering from Cystic Fibrosis then its time to keep all stress behind since The Cystic Fibrosis Foundation and Vertex Pharmaceuticals of Cambridge, Mass. have recently made a public announcement that a new drug has been invented which can heal the primary cause of cystic fibrosis.