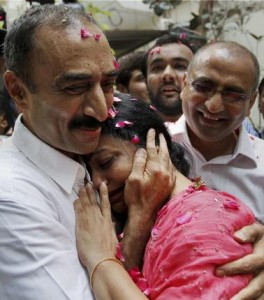 Speaking to the media, Sanjiv Bhatt said, “Yes, it is true that my services have been terminated. This was expected. They have been conducting a completely ex-parte inquiry. I got the letter (sack order) from them (the Home ministry).”

The Government said that they have found Mr. Bhatt with another woman in an 11 minute video and he was having an affair with a woman. Being an IPS officer, he was having an illegal affair and that is against the rules of his service.

Denying the allegations, Sanjiv Bhatt said that he was not the person who was shown in the video clip. In fact, he said he was also ready for a biometric test, if needed. This IPS officer was in the news since long time as he became famous by alleging Mr Narendra Modi for Gujarat riots.

Bidding good bye to his police career, he said, “I had joined the police with a passion, now it seems the country and this government does not need me. So whatever has happened is good. I cannot impose myself on the government.”

Fight between the politicians and bureaucrats is a long story in Indian administration. Many bureaucrats have faced the wrath of their bosses in the past.

Today was the Groundhog Day and the cute puppies came out in the open to predict the winter, people were asking whether the groundhog has seen his shadow in 2011. This winter, a massive storm paralyzed a large part of the United States with ice, snow and freezing rain. Hence, everybody was worried when this […]

No Pulitzer Prize Winner For Fiction This Year

Pulitzer prize jury board declared on Monday that the board has failed to announce the name of prize winner for either fiction or editorial writing.

Child abduction, suicide bombers, crucifixion and live burial is what children under the age of 18 are going through in Iraq. It seems the countries youth is in danger and rapidly vanishing due to Islamic state militant practices. Children in the minority zone are trained to be soldiers, bomb makers and are sold in the […]