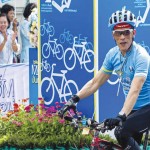 Hundreds and thousands of Thais cycled this Sunday in Bangkok to mark Her Majesty the Queen’s 83rd birthday, led by HRH Crown Prince Maha Vajiralongkorn.

Around 295,000 people registered for ‘Bike for Mom’ contest in advance, out of which 40,000 participants were from Bangkok itself, while about 254,863 participants were from other provinces. Foreign riders were also allowed to participate in this contest. As per the Guinness World Records, there was 146,000 eligible cyclists participated and rode the cycle at the same time. It has created a new Guinness Record, surpassing the record set in Taiwan where 70,000 cyclists participated.

Guinness Records also confirms that participants had to follow the rule that was set for the event, which states that every participant had to leave from the starting point at the same time nationwide and it was mandatory to ride continuously for four kilometers before a halt.

The Crown Prince had presided over the opening of the event in Bangkok at Royal Plaza. After the horn was blared to indicate the start of the event, he and his daughter HRH Princess Bajrakitiyabha led the procession to the 11th Infantry Regiment, completed 43 kilometer route and returned to the starting point. The other provinces that participated in the event followed different routes to join the event.

Where Have William and Kate Middleton Headed For Honeymoon?

After the tragic ending to the history of Princess Diana, the nuptial knot uniting Prince William and Kate seems mark a new beginning for the royal family of Britain. Kate and William took a wine coloured helicopter that was waiting near Buckingham Palace to fly them out to their short weekend getaway after which Prince […]

Fears seemed to be running high over the UK economy as the factory production in June recorded a surprise fall. The trade gap of UK has also widened to a great extent and as these results came out, London stock market started moving further downwards.

A major earthquake of the magnitude of 6.3 struck the busy city of Christchurch in New Zealand. Many buildings have got collapsed and vehicles got buried under the broken houses and buildings in this New Zealand earthquake 2011. The earthquake hit the city at 12.51 PM local time. Many people have expected to die, though the […]