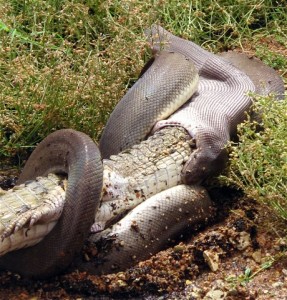 Onlookers were surprised and shocked to see an unseen and unheard terrible incident which happened at Queensland Lake in Australia. According to the reports obtained a snake defeated a crocodile in an epic battle and had even engulfed it in its large voluptuous mouth.

The snake was a python which had a clash with a three foot fresh water crocodile and devoured its prey in a few moments. The mind boggling incident happened at Lake Moondarra near Mount Isa, a remote town in the north west of the state of Queensland. Remarkable images were taken by a local resident Tiffany Corils who watched the incident totally. The images showed the snake was strangling and eating the crocodile and the outline of the fresh water giant can be seen on the body of a snake.

Ms Corils said that the croc tried with all its might by trying to keep its head out of water as a means to survive, but eventually failed to the other giant who was better enough. However she exclaimed that such a battle left the duo extremely tired and exhausted as the morning progressed and the sun grew bright, but ultimately the three foot croc sort of surrendered itself.

In order to make some solutions to avoid the deadly fiscal cliff, President Obama initiated a public relations exercise to execute his plans to raise the taxes on those Americans who are wealthy.

No Pulitzer Prize Winner For Fiction This Year

Pulitzer prize jury board declared on Monday that the board has failed to announce the name of prize winner for either fiction or editorial writing.