Can you believe that an American is not celebrating the death of Osama Bin Laden? The unusual seems to have come from Rashard Mendenhall, running back of Steelers Team. While the death of this terrorist came as a good news to the entire nation of America since the man was held responsible for killing approximately five thousand Americans in the September 2011 attack.

Rashard Mendenhall tweeted in his account and said that he is not convinced on why there will be celebration in someone’s death. In his statement, Rashard Mendenhall has stated that it is not proper to hate a man even without listening to him. No decision needs to be taken by hearing anything one sided.

People were really shocked when he tweeted that he was not convinced that the World Trade Center collapsed because of some planes hitting them. It is hard to believe how come some planes can bring down big skyscrapers.

Art Rooney, President of Steelers has stated that their entire team is very proud of what the American soldiers have done in Pakistan and hoped that the US troops will come back home soon. 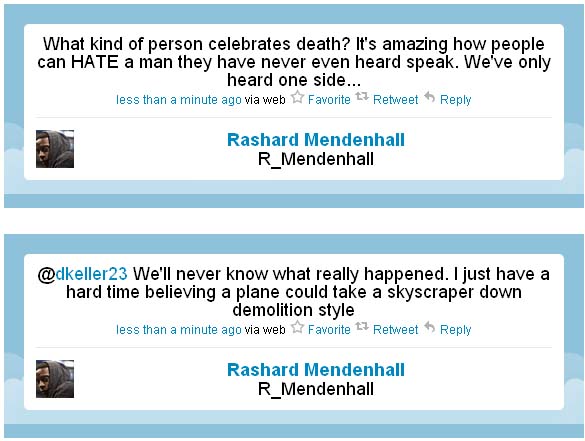 Reduction Of Child Benefits To Create Anomaly In UK society

UK tax authority has decided to stop giving child benefits to persons where one member of the family is earning more than £50,000 in a year. These families are expected to receive letters quite soon from the tax authorities.

One Reply to “Is Rashard Mendenhall Not Happy About Osama Bin Laden Death?”