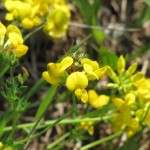 UK scientists have been conducting research which shows that plants actually conduct a mathematical calculation when they cannot make food during the night and hence the use their starch reserves.

The scientists have been studying the plant called Arabidopsis and they are astonished and amazed at how the biological system of plants is undertaking such a sophisticated mathematical calculation. The research showed that the plant must be doing an arithmetic division in order to adjust the consumption of starch from their reserves during the night.

The scientists said that it is amazing that plants are actually doing maths in a chemical way, even though it is pre-GSCE maths. While the night moves on, the leaf mechanisms measure the starch store size and further information comes from the internal clock just like human beings. The scientists could conclude a mathematical modelling for investigation of the division calculation that takes place within a plant body at night.

Posted on May 9, 2011 Author Sandra Thompson

According to a research conducted in UK by the Stroke Association, it was observed that around150,000 people in the country experienced stroke each year. Out of these individuals, 29000 strokestook place because of bleeding on the brain.

Follow these dos and do nots for breastfeeding mothers

The first week of August is celebrated as the breast awareness week and so it is a must for all the new mothers to know the dos and do not’s of breastfeeding. A mother’s milk is the best food which can be given to a newborn baby. It contains all the important nutrients essential for […]

Decision Resources, which is considered to be one of the world’s top research and advisory firms for pharmaceutical and healthcare related matters revealed that while compared to other agents presently available, Centocor Ortho Biotech/Merck/Mitsubishi Tanabe Pharma’s Remicade (infliximab) has been chosen as the most effectual therapy for the treatment of minor to severe ulcerative colitis by the […]