Earlier we published a news “Motorola “Xoom” The Best Gadget Of The Year Will Hit The Market Soon”. It was then a 3G version of the tablet PC that was launched during February 24th. But now Motorola will be introducing its Wi-Fi version at the end of this month. Though OSM speculated that Wi-Fi version will arrive around April, bit this report seems to be false as a sales ad from Staples shows something different. In the ad it is clearly visible that the Xoom WiFi-only version will be arriving in the stores on March 27. The price of this device has been mentioned $599.98. 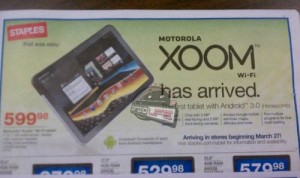 Motorola CEO Sanjay Jha at Mobile World Congress confirmed that the 3G version of Xoom would be available at $799 on Verizon (without subsidy), while its Wi-Fi version will be priced at $600. So it came out to be what we all expected.

Now what we are trying to find out whether Xoom Wi-Fi only version can beat the competition against iPad 2. As 32GB iPad 2 with Wi-Fi is priced at $599.00, while the price for Xoom Wi-Fi only version starts from $599. Though Intomobile reported, Sam’s Club will be offering Wi-Fi Xoom at only $539, we are not quite sure whether it is true or not. It is yet to see if Xoom becomes able to win over next gen iPad.  Perhaps the early release could help Xoom to sustain well in the tablet war.

Motorola has recently announced that they are going to launch soon two new handsets in UAE. One is named Flipout and it is a smartly designed square shaped smartphone, while the other one is Motorola Defy, a slim, ‘life proof’ model that easily fits into the pockets.

Office 365 Pricing Is Within Affordable Range

Finally, the Office 365 from Microsoft has been launched. The company came out with a new program after they launched Beta nine months back.

Life On Earth To Wipe Away After 1 billion Year?

The sensational news on the life of human existence to be in danger after 1 billion years of their long stay in earth seems to have grasped the attention of the readers. Scientists have confirmed that the climatic changes and the imbalances in the natures-human paradigm has created this rift and eventually threatened the life […]