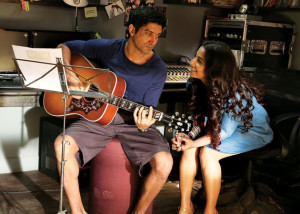 The recent talk of B-town, ”Shaadi ke side effects’, directed by Saket Chaudhary has hit the theaters and big screens recently. The Farhan Akhtar and Vidya Balan starred is a mixture of romance and comedy and shows how to spice up the relationship of husband and wife. The two protagonists are played by the duo where Farhan plays Siddarth, who is a struggling musician and Vidya plays Trisha, the wife. They ultimately come to life as husband and wife after, Sid having beaten the fear of marriage and Trisha vowing finally for the third time round.

The both characters are believable and are very well supported with strong acting. The screenplay adheres the film to the realms of reality and never deviates. The two pivotal characters trying emphatically to cope with each other’s fantasies and realities is what the story is all about. Trisha sacrifices her career and pushes her hubby to be up and doing in meeting all her excessive demands for her only baby.

However the film offers nothing new except the homely scenes portrayed well with good dialogues and gender politics which are very common in a married life. It boasts of few good wits and has good hold on fun till the end.

Sajid Khan’s ‘Himmatwala’ Not Up To The Expectations

Sajid Khan’s ‘Himmatwala’ did not come up with the expectation level of the 1980’s remake. The director’s idea falls in keeping the balance of the remake of 1980’s.

Since after Aishwaria gave birth to a baby girl, everybody is eagerly waiting to know what name will be given to the little princess. Internet was flooded with fans’ queries – whether Big B has picked any name yet for her little grand child.

Millions of fans were waiting for the  premiere of Britney Spears’ “Hold It Against Me” music video which took place yesterday on February 17. The show was premiered on MTV and MTV.com. In the music video we saw Britney in a completely new and edgy look that was designed by B. Åkerlund who has also worked […]