A recent study reveals that if women with a moderate family history of breast cancer go for a Mammogram testing prior to the age specified by U.K. National Health Service, then they are more likely to live longer after diagnosing of this invasive cancer.

According to U.K National Health Service women between the ages of 50 and 70 are recommended for this screening process.Though researchers said if women below the age of 40 if diagnosed as a patient with Breast Cancer, then they have greater chance of survival since their breast cancer has been spotted in advance with minor and less aggressive tumors. 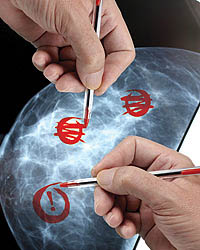 British researchers scrutinized mammogram results for nearly 6,710 women who have at least one family member diagnosed before reaching 40 or several relatives suffering from breast cancer. Among them 136 women were identified with the tumor growth at the spot between 2003 and 2007.

The study has been published online in The Lancet Oncology on Nov. 18, and has covered women from 76 health centers through 34 cancer research networks. As per the report 91 percent of the enrolled women were aged between 40 and 44 at the start. The average age of these women was 42, and a little less than half had a family member with breast cancer spotted at younger than age 40.

Approximately 77 percent of the breast cancer cases have been diagnosed during the screening, giving the result of 79 percent of early mammograms sensitivity rate. Researchers expected an 81 percent standard 10-year survival rate among the participants, even as survival rates for the women in control groups were predicted at no more than 73 percent.

Having a job satisfaction and giving full engagement at work depends on many causes. But also a healthy sex life plays a vital role in as per a group of researchers. Keith Leavitt, an associate professor from the College of Business, Oregon State University, and their team of researchers, have recently published their findings in […]

Depression is not just physiological in nature but has a lot of interconnection with genetics. According to a study conducted by the University of Central Florida, the genetically variant has been carried by about 25% of the population and this is the reason why most of them are born to be depressed. Science says that […]

If your mind is under your full control and you can stop being restless, then it imply that you are living a happy life. Recently a study has revealed this amazing fact that mental focus is a key to happy and successful living. Human brain being significantly different from animals tends to wander. In fact […]

2 Replies to “Early Mammograms Can Reduce The Risk Of Breast Cancer: A Study”