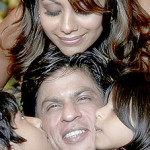 After peek-a bow on the third child of Shahrukh and Gauri with lots of unpredictability and speculation, SRK has confirmed the news reports amidst the media presence. The BMC officials’ interrogation and their visit on Shahrukh ‘s Mannat has created the sudden spurt of news on sex-determination techniques, it was reported that Shahrukh and Gauri are planning for their third child through surrogacy and they have been alleged for their sex determination technique which has brought them into legal proceedings . However these doldrums has creted an emotional turmoil and much aggrieved Shahrukh told media reporters to be away from their private life as they are emotionally depressed and distressed amidst the hue and cry over the public opinion and other legal proceedings on the birth of their third child. The baby was prematurely delivered and born at Masrani Hospital in Andheri by a surrogate mother within 34 weeks and reportedly weighed in 1.5 kg, both mothers and baby are doing well and are being brought at SRK’s residence. Shahrukh however has alienated from the media glare and retorted to the remarks saying that the final discussion will be made only after this dark days of gloom are over and so is the legal claims.

Sajid Khan’s ‘Himmatwala’ Not Up To The Expectations

Sajid Khan’s ‘Himmatwala’ did not come up with the expectation level of the 1980’s remake. The director’s idea falls in keeping the balance of the remake of 1980’s.

Grammy Nominations 2011 Have Been Announced

You must have been thinking to be Bristol Palin, but believe me, this time America voted honestly. The Dancing with the Stars 2010 winner is the best dancer of the competition Jennifer Grey. Her performance was really the best in the evening amid the fact that she overcame her pain of slip disc to win […]