Millions of voters casted their votes to choose their favorite actors and actresses for much awaited People’s Choice Awards. We saw that most of the viewers preferred pirates over vampires and it was quite evident that Kardashians are more admired than the “Jersey Shore” on Wednesday night  People’s Choice Awards red carpet.

Pattinson failed to get in the Favorite Movie Star Under 25 Award – which was given to winner Zac Efron. 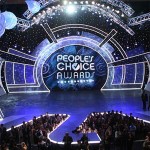 The cast of “Jersey Shore” was nominated for the Favorite TV Guilty Pleasure award, but could not win the category to the “Keeping Up with the Kardashians” clan.

Neil Patrick Harris and also Jane Lynch received the Favorite TV Comedy Actor and Actress awards. Moreover, Adam Sandler was given the Favorite Comedic Star award which he received from presenter Jennifer Aniston. Another winner of the award was Conan O’Brien, for Favorite Talk Show Host.

Host Queen Latifah started the show with a presentation of Taio Cruz’s “Dynamite,” which got the star-studded viewers to its feet. Other wonderful presentations were performed by Selena Gomez and Kid Rock to make the event more memorable one.

Prakash Jha’s upcoming political thriller Chakravyuh receives a 15 minute standing ovation at the London premiere. The film, has been showcased at the prestigious Empire Cinema in Leicester Square, and it was also a part of the official ‘Thrill Gala’ selection of the London Film Festival.

Noted Pakistani singer Rahat Fateh Ali Khan was finally released by the Government of India authorities after 28 hours of being detained by India. Pakistani authorities were constantly pressurizing their Indian counterpart to release the singer from protective custody.

Megan Fox poses topless and appears quite similar to another hot celebrity who is none other than actress Angelina Jolie. Megan will be seen in a sexy new commercial ad for Armani. The 24-year-old actress was dressed in tight white jeans and reveals her bared and tattooed back.