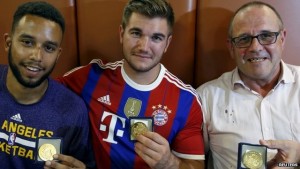 Three Americans have becomes stars overnight for subduing an armed ‘gunman’ on a high speed train in Northern region of France. The train was travelling from Amsterdam to Paris, when the gunman open fired, which wounded two passengers, before the trio overpowered them. When the Thalys train was crossing Belgium, the attack took place. The gunman, later identified as a 26 year old Moroccan was handed-over to the anti-terrorist officers.

Among the three, two of the Americans were in the military as confirmed by their childhood friend Anthony Sadler, working for Sacramento State University. As per Sadler’s statement, they heard a gunshot all of a sudden and encountered some train employees to sprint past them, immediately after which they saw the gunman appearing with a rifle. As the gunman was just about to fire, the three of them has beaten down the gunman.

Few of the passengers helped to tie the gunman, while others helped the wounded passengers. According to the police reports, the attacker did not harm anyone with the automatic weapon, but wounded one with some sort of blade and another with a handgun. Among the injured in this attack was French actor Jean-Hugues Anglade, who suffered a little injury while trying to activate train’s emergency alarm.

Most of Europe’s rail stations are equipped with high security, every passenger must pass through security alert, but passengers can skip passing through metal detectors and having their bags searched if it is about boarding a high speed train. Post this incident, the security check is expected to gear-up.

People Make A Meal Out Of Raw Camel Livers In Sudan

There is no end to weird cuisines across the world .The latest in news with regards to this is the consumption of camel’s raw liver by some people of north Sudan. There would be many who would make the tedious journey every week to the muddy village of Tambul to get there share of the […]