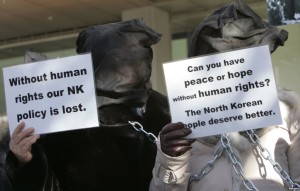 Violation of human rights, suppression of human rights and freedom, torture and encroachment on the liberty of people’s activity has been concerning issues ever since time immemorial. This time it was North Korea who was under the scanner of the United Nation’s panel, which has found the nation guilty of violation of such buffers to human peaceful existence.

The panel accused North Korea of severe crime and issues like extermination, torture, rape, forced abortions and starvation. Moreover the commission thinks that there is complete denial of right to freedom of thought, expression, information and association. All the social activities which are organised by the citizens of all ages are presumed to be controlled by the Worker’s Party of Korea. The state, by this way is able to monitor all sorts of activities and it also dictates the daily lives of the citizens. Human right to information is completely restricted as the citizens are forbidden to obtain information from any independent sources. Only state run media operate and people are left with no option than to retrieve necessary information from such biased sources.

The songbun system, which classifies people on the basis of state assigned social classes and birth and also includes considerations of political and religious preferences, thus enhances discriminatory thinking. The songbun system also stands responsible for gender based discrimination which is equally pervasive. The state is the supreme authority in determining as to where the citizens should live and work, making the situation more hellish for proper sustenance. This has led to a big division in the society and there is a segregated society where only those people who obey and are loyal to the leadership can live and work in favourable conditions. There is also a complete ban on people trying to move abroad and there is a massacring violation on the freedom of movement and residence.

When Mamata Banerjee is thinking about the central funds, there is a step which will help her breathe patiently from the next financial fund. As per the rough estimates, it is found that Mamata will have approximately 5400 crore of central funds which she will be utilizing for innovative schemes for a particular area.