Though the divorce between Michael Douglas and his ex-wife Diandra Douglas took place a few years back, the matter has again take an ugly turn as it has been brought in a New York court. 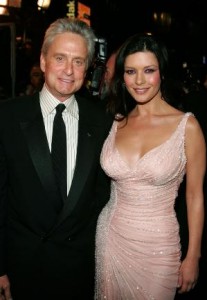 In the Michael Douglas divorce settlement, it was clearly stated that Diandra will be getting a portion of the money the actor will be getting for the movies doing during the period the duo will remain married. But now the ex-wife has asked for a portion of the money Michael earned by acting in the film Wall Street 2, Money Never Sleeps. The actor said that the movie was not even on the horizon when they were married or even when they split.

Inside the courtroom, the actor’s lawyer said that Diandra Douglas should be shameful of her greed as she has already received money of $51 million from the divorce deal in the past. Critics are saying that what Diandra Douglas is doing is an shameless act of greed. When you have got separated from your husband, why you are running for money behind him and polluting the institution named marriage?

In the divorce pact of Michael Douglas, it was clearly stated that all future money disputes in this regard will be taken up in the court of Santa Barbara and California courts are also very well suited for handling the mixture of entertainment and divorce laws. But in this matter also, it was seen that Diandra Douglas is insisting to pursue her claim in New York. Michael Douglas lawyers are saying that the actor comes to New York City occasionally to get his treatment done on throat cancer.

At present, Michael Douglas is staying with his current wife, the Oscar winning actress Catherine Zeta Jones. The couple have got two children from their marriage. This divorce episode is becoming a tough time in the life of this Basic Instinct star.

The mystery behind the death of world pop star Michael Jackson has brought the entire country to standstill. He was quirky and freaky rock star who ruled the nation with his melodious harp and charmed the audience. However his unjustified death has aroused rumors and controversy on his various link ups. It was the matter […]

Jennifer Aniston who had been dating her boyfriend, screenwriter and actor Justin Theroux, is engaged to him for marriage. Together they also appeared on the Comedy show called “Wanderlust” in the month of February.

Tony Romo, the quarterback for the Dallas Cowboys, has finally tied the knot this Saturday. The bride was none other than the pageant queen and popular TV reporter Candice Crawford. As per the news report nearly 600 guests attended the wedding ceremony. Among those in the list of invitees, singer Ashanti and former Dallas Cowboy Troy Aikman, […]