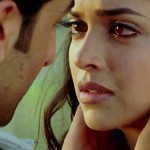 During the recent award ceremony of IIFA awards function Bolly A-listed heroine Deepika Padukone have reportedly said to be missing Ranbir from all the exclusive actions and enjoyment after receiving best Jodi award in Star Plus grand celebration. Her co-star and ex boyfriend Ranbir Kapoor were seen back on screen after their much publicised and alleged break up, already the success of this multi starrer romantic flick ‘Yeh Jaawani hain Deewani’ has joined the much hyped 100 crore club with the brilliant performances of the bollywood stars. He has truly thanked Ayan Mukherjee for directing this beautiful and lovable film which has lured the audience and has kept them glued till the end. She has expressed her deep contentment and ecstasy over the audience remarks and has thanked them for their outbound appreciation. Inspite of all these successes she has confronted her disappointment on missing Ranbir Kapoor and Ayan Mukherjee from those mass appreciations and accolades.

Actor Karthi Marriage To Break The Heart Of His Female Fans

Sexiest Man Alive 2011 Feels Unexpected And Happy About The News

Finally, Bradley Cooper has been awarded as the sexist man alive 2011 by the People’s magazine. Not only the film fraternity, but even the actor was stunned to know that he has been chosen as sexiest man alive 2011. But Cooper was very much happy to hear the news of his selection.