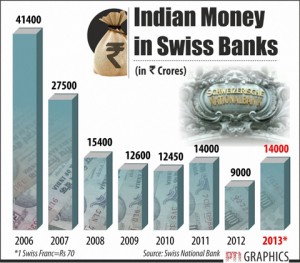 The controversies of India remains the same where maximum people residing belongs to a below poverty level, and we are topping the chart of Swiss bank with 1,195 names and Rs 25,420 cores under investigation. According to the laundry list released on February 9, some of the premium ex-bureaucrats, politicians and businessman of our country are holding accounts with Swiss bank.

The names are like Smita Thackeray, daughter in law of Bal Thackeray, ex congress MP Annu Tandon, Ambanis , Neotias, Birlas and more. The news has raised a political squall throughout and under Supreme Court’s order a special investigation team are working on the details of 628 accounts of Indians held through HSBC. The report is of the year 2006 to 2007 and statistics shows fund of $102 billion globally was held by the bank among which Indian linked accounts contains 4% of the total. The investigation team claims all the accounts do not contain illegitimate money.

A fact of the report is that eight year old maximum of the account found is either having zero balance or come to its dead end and non resident accounts are still untraceable leaving behind hand counted number of 339 people for further questioning. Though the outcome of investigation is under process but at least we can say that Indian Express and International Consortium of Investigative Journalists (ICIJ) have achieved to induce fear into the hearts of wrong doers and put forward a strong example in front of the tax invaders.

Jayalalitha The Chief Minister Returns to Office with Gifts for Voters

On Monday, actor turned politician, Jayalalitha was sworn in for her third stint as chief minister of Tamil Nadu since being elected back in 1991. Without wasting any time the AIADMK leader dished out a lot of gifts for the state’s female population and for those under the poverty line

Newly wed Prince Charles and Kate Middleton, duchess of Cambridge have arrived in Toronto to celebrate the Canada Day on July 1. The royal couple is getting huge media publicity as about 274 international journalists are coming to cover the Canada day tour of the royal couple.