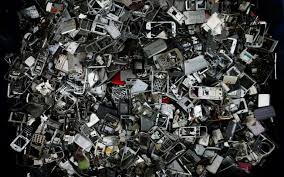 As per reports from UN the accumulated volume of all the E-waste, in the coming 4 years, is presumed to rise by a whopping 33 percent. This weight is equivalent to the weight of eight Egyptian pyramids. An initiative by the UN has been carried out by the name of Step Initiative which will work to fight the growing e-waste crisis of the world.

In the past few years, almost 50 million tonnes of electronic waste was collected in a worldwide basis. This means approximately 7 kilos per person on this planet. It does not stop here. These electronic wastes are devices that have been made using multiple toxic materials. These toxic substances include cadmium, lead, arsenic, mercury and even flame retardant elements. For instance, a CRT computer screen that is old styled contains at least 3 kilos of lead. When dumped, these toxic substances penetrate into the environment and contaminate the air, land and water. Such is the effect that people who work at the sites where they are dumped, suffer from regular hours of ailments that are fatal.

Interpol also claimed to have had a check on the level of electronic wastes that are being shipped to the developing countries. 1 in every 3 containers would have these illegal electronic wastes filled ready to be dumped. As many as 40 companies came under scrutiny and criminal investigations had begun against them for carrying out with the illegal work. Additionally it has been reported that due to the life of electronic devices shortening, these dumping became more regular. This also led to many explosions that have been happening on the sites.

Many reports have also shown that these electronic wastes that are being dumped also come from old refrigerators, electrical toys and also electronic toothbrushes. These, in fact, are the world’s largest and fastest growing waste materials. China has accumulated around 11.1 m tonnes of e-waste which was followed by the USA with 10 m tonnes of e-waste. This, if not stopped now, will rise up to a level where 40 tonne Lorries of 15,000 mile line will be filled. Exporting discarded products in poor countries is an illegal act and they should be either refurbished or re-used.

Pongal, Festival Of Harvest Is Here

India And Thailand Trade Accord Announced On Republic Day

On the 63rd Republic day, India and Thailand decided to frame a duty free agreement which can be concluded towards the middle of this year. This duty free agreement with Thailand may have far reaching consequences and may double the bilateral trade between the two countries to $14 billion by the year 2014.

Of late, it has been seen that United States has increased its reliance of Saudi Arab for oil. Although the escalation in the import rate of U.S had been noticed since the former summer, the pronouncement has been observed this year when the growth mark crossed 20%.