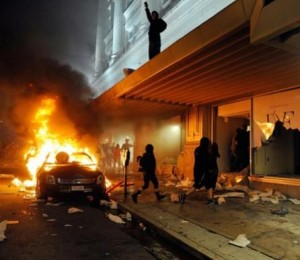 Fans of Vancouver Canucks became angry and drunken as their favorite team lost to Boston Bruins by 4-0 in the Game 7 of the Stanley Cup finals. They set ablaze the cars on the roads and the garbage cans, smashed the roadside windows. They also threw beer bottles towards the giant TV screens. They were also seen dancing on the top of the overturned and burnt out vehicles.

Smoke was found to be coming out of the landmark building as hooligans were seen coming out with their face covered with bandannas and the violence continued. People were asked to remain out of the Central Downtown area and the police and firefighters have been pressed into service. Even the police cars were not spared and they were also put on fire. Mayor Robertson said, ““The vast majority of people who were in the downtown tonight were there to enjoy the game in a peaceful and respectful manner. It is unfortunate that a small number of people intent on criminal activity have turned pockets of the downtown into areas involving destruction of property and confrontations with police.”

It was for 39 years that Boston Bruins was without a championship title and finally when they lifted the Stanley Cup, thousand hearts broke into joy. The cup will now head for the hub of hockey.

37 years old Thomas played a splendid performance and he made 37 saves in the entire game. Patrice Bergeron and Brad Marchand each scored two goals and Boston Bruins went on to beating the Canucks by 4-0 and won their first NHL title since the year 1972.

Derek Boogaard, a Canadian ice hockey winger was found dead in mysterious circumstances in his residence on Friday. Though, no further details are available in relation to the death of Boggard but medical examiner of Minneapolis is still investigating the case.

World Cup Cricket Has Given A New Look To Bangladesh

Bangladesh is trying to give a new look and are trying their level best to give a nice impression about the capital city Dhaka. Huge posters urging the Bangla Tigers to give in their best and large cutouts have marked every busy street corner of the city. The hoardings at the crossings reflect the messages […]

A fantastic 33 yard field goal by Sebastian Janikowski helped Oakland Raiders to gain a smooth, wonderful victory over AFC West leading Kansas City Chiefs. The Raiders won the match by a margin of 23-20 and it is considered to be their biggest win in the past eight years.