You can call it another celebrity jailbreak. But this time, it is legal. In the Lindsay Lohan theft case, at first the judge ordered sentencing the celebrity to 120 days in jail and 480 hours of community service. 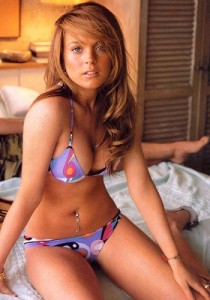 Within five hours of announcing this judgment, Lindsay Lohan was out on bail by paying $75,000 as bail bond. She made the payment with the help of her trusty bail bondsman and her attorney is pending the appeal against today’s ruling.

Lindsay Lohan was released from Century Regional Detention Facility in Lynwood, California and it was around 9.30PM. Getting released she was driven off in a black SUV with a police escort.

Some people are also of the opinion that celebrity status of Lindsay Lohan is the main cause of judge giving such a punishment to her. The gravity of the crime was not that intense. As arguments and counter logic goes on, Lindsay Lohan and the jewelry shop continues to get publicity out of the matter.

Miranda Kerr has posted a recent picture of her in Instagram, flaunting her naked body, which garnered many negative feedback from her followers. The picture was posted to emphasize a pair of Reebok Runners, while Miranda is often seen posing for the brand in a crop top and a pair of leggings. After Orlando Bloom’s […]

John Stamos, famous for his role as Jesse Katsopolis on the highly rated family series, “Full House”, also plays the drums for the Beach Boys and will perform with them in a concert that is aimed at raising funds to benefit the Huntsville Hospital Foundation in wake of the devastating effect of the tornadoes that […]

World Waits For The Release Of Harry Potter And The Deathly Hallows: See Trailor

The latest “Harry Potter and the Deathly Hallows” is going to be released on November 19th and the worldwide craze is mounting up slowly. The friend of the wizard kid Rupert Grint spoke to News365Today.Com and said that making of this movie was a bit tougher than the previous Harry Potter movies because they had […]