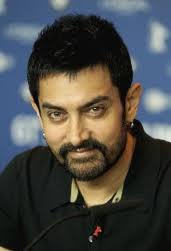 The title track of Satyamev Jayate, the first TV show by Aamir Khan, was launched at Andheri in Mumbai. Satyajit Bhatkal who happens to be a very close pal of Aamir, is the director of this show.

The director is also a writer and has an experience in directing as he directed the movie Lagaan. The show is about getting connected to the commoners of India. This TV show frames the real lives and life of the common India. It can be about the health problems of the people staying in rural India or about the roadside children in urban India. The show will be in the chat form.

Ram Sampath is the composer of the title track and Prasoon Joshi happens to be the lyricist while Ram Madhvani has shot the track. The Delhi Belly composer (Ram Sampath) has also sung the song, along with Kirti Sagathia.

It had also been announced that apart from the aforementioned show anthem, a song will be there exclusively in each episode. While Aamir Khan gave a brief overview about this show, he opened-up on the sentiments that are attached with the show.

When asked about the necessity of a special song for a TV show, Aamir Khan said, that his patriotic spirit and love for his nation made him opt for this venture. He said that his songs will touch the heart of the millions.

He also briefed about the significance of this show by saying that this show is extremely close to his heart. He also said that his ambitious nature made him get along with his 2 years journey on this show. He did not get into the detail as he wants everyone to enjoy the show to the fullest.

Son Of God All Set To Sweep Box Office Collections

The deliberate fight for film world’s most prestigious and glorious award, Oscar, will be tight as there is an expected strong battle between Universal’s Liam Neeson actioner “Non Stop” and Fox’s Biblical drama “Son of God”. The former is expected to make box office collection around $25 million, surpassing the latter which should end up […]

Axing of the famous British singer Tom Jones by BBC from their talent hunt show The Voice has brought mixed reactions from different corners. While Sir Tom Jones said that he was disgusted as he was informed only yesterday by the BBC authorities that he is not returning. He will be replaced by Boy George […]