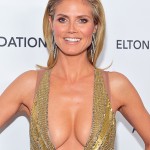 Donald Trump is again in the news by commenting on women and their lifestyle. And this time his target has been the supermodel, Heidi Klum. Earlier this week, Donald made an embarrassing comment on Heidi Klum by saying that she is no more the beauty that she used to be and her 10 ion 10 is a past.

But what has made the difference this time around is the trump response by Heidi Klum. She has published a video with the help of a news channel where a man is seen to be wearing the Donald Trump mask and suddenly he rips off the 10 mark on Heidi Klum’s shirt revealing 9.99. Donald Trump wife has come to the rescue of her husband by commenting that people should not take Donald’s comment from their heart. But this is not the first time that he has made such comment disrespecting the women.

Numerous occasion in the past he tried to moll women by commenting such string of words. In his recent book, Trump 101 he has compared the women to pleasing aesthetics which is quite disrespectful to the women society. Although his wife has come into act of symphony but it does not look like this cold war between Heidi Klum and Donald Trump is going to get over very soon. Because the video that Heidi has made in response to what Donald said about her, is quite annoying for Trump and now it is to be seen if Donald Trump makes any further comment on this issue.

American idol started off their 10th season on January 19th and we all saw Jennifer Lopez and Steven Tyler as the new set of judges of this famous show on the American television. Viewers are asking many questions about these two judges, though both of them are saying that the show will see the combination […]

Nobody will support this Machete race war

The movie Machete has been released and people are scary that the Machete race war may began at any time. The movie says that the white people must lock their doors and keep ready with loaded guns as hundreds of Mexicans are on their way across the border to attack America and the fact is […]